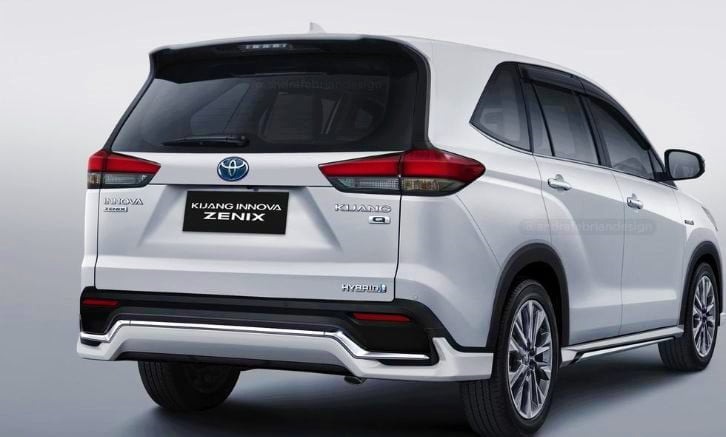 A few hours after the images were leaked, the 2023 Toyota Innova Xenix 2023 has been officially unveiled in Indonesia. Price starting from 965,000 baht

The 2023 Toyota Innova Xenix comes with a more solid design compared to its older model.

Innova Cresta, from the new headlights. Comes with a more square face frame Hexagonal front grille, similar to the original shape, but the frame size is modified to be smaller,

It doesn’t take up the area to the center of the front bumper because a strip of cooling vents are used to separate it. It’s a little more distinctive with LED light bars and fog lights above the skid plate.

At the same time, the lines of the car on the side look stronger than before including the decoration of the wheel arch rims with matte black plastic work, as in fashion,

The side cheeks are proportionally designed to appear bulging both front and back even the tailgate itself has also been printed to have a more pronounced embossed dimension as well.

Different designs of controllers It can be said that it has also been completely redesigned. Both the lines, the panel lift parts, the air vents, the steering wheel, and even the gear lever position. Also an indentation to the top to increase the front passenger legroom and if you notice the gauge cluster that comes with it we can see that if it is a typical car

It comes with a hybrid powertrain. It will use a full digital screen divided into 3 parts, which looks more modern.

To ventilate the cabin in addition to expanding the space between the three rows of seats , the car also comes with the option of a panoramic glass roof that extends from the front seat line. to the seat above the passenger’s head in the second row of seats,

The position of the air vent has been moved to the side instead for better air distribution. There is also a lighting system framed on the upper glass as well. To increase the aesthetics of the night

One of the main reasons the Innova Zenix has a much wider cabin. is that it is built on the TNGA-C platform that the company uses for its midsize cars,

For the same reason we can expect a comfortable ride. Not only the width of the body but also the ability to absorb vibrations and the vehicle’s control and stability can be improved a lot.

If you still can’t imagine,

This new car from Innova comes with a body size of 4,755 mm in length / 1850 mm in width / and 1795 mm in height. It has a long body size. With only 20mm more width than before and the height is exactly the same which doesn’t look much different.

But in the wheelbase figures it appears that the new car has a wheelbase of 2850 mm. As a result, there is a figure in this section that is 100 mm more than the previous one,

Therefore, it is not surprising that the interior space in the cabin is wider. Especially with the passenger seat distance from the first to the second row. and second grade to third grade

Engine power is another point where there is a big change. Because at this time it removed the 1GD-FTV diesel engine with a capacity of 2756 cc, with a variable VN-Turbo turbo

mated to a 6-speed automatic transmission with manual mode,

It is powered by a set of rear wheels in the upper left version.

When the two power units work together via an e-CVT automatic transmission with manual mode,

It will be able to produce a maximum combined power of 186 horsepower at 6,000 rpm,

That is, 14 horsepower more than before. The drive system switched to an already completed front-wheel drive system.

Power is transmitted through a CVT automatic transmission with manual mode and of course the drive system has also been converted to front-wheel drive as well.

The suspension aspect of the new Innova up front will continue to use MacPherson independent suspension . But in a rear suspension that does not have a drive shaft to work with in any way it will change to a torsion beam. The braking system has been changed to disc brakes on all four wheels

It comes with an electric handbrake system on all sub-models.

Finally, a set of wheels will be available in sizes from 16 to 18 inches and use wide tires from 205 to 225 depending on the sub.

The price starts at 419,000,000 rupees in Indonesia and the most expensive one is 611,000,000 rupees or about 1.4 million rupees. And what will be the price of distribution in Thailand? We’ll have to wait and catch up on each other a few moments from now.